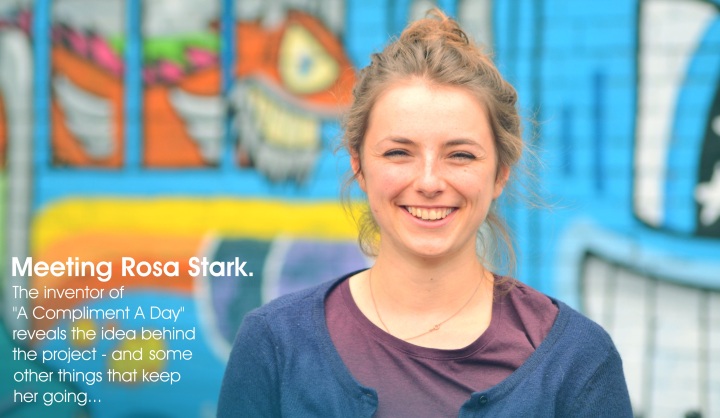 I guess, I’ve made a friend the other day.”

Sitting in a chair at Cologne’s Goldmund Café – a place for coffee and a second-hand-bookshop – Rosa Stark switches between languages while talking. German, English, German and back.

It’s no surprise since the student of philosophy, Yoga-teacher and inventor of the “A Compliment A Day”-Project is half American and half German. Her dad lives in Michigan. Next stop for her, who was born in Berlin and now studies in Bonn, is San Francisco.

There she will persue her recent project. It’s called “A Compliment A Day” and bases on that simple concept. On each of the last 59 days Stark has made a compliment to a stranger. On various locations and in various towns. On the day before she went to a Cologne kebab-restaurant and met a professor there who now is her friend, she says. “The kind of friend you can call and have a beer with”, Stark states.

“My project is very personal. And a good way to overcome fears”, the coffee-lover says. In Berlin she was looping around an attractive guy a few times. “It took me four attempts”, Rosa Stark remembers. Which is quite funny since she’s very open and talkative. “After my compliment he said ‘thank you’ and told me that I’m attractive, too.”

Giving back the compliment is among the top 3 answers she gets. Others are: “I like the idea of your project” or one time it was “I like your pants”, Stark remembers.

So what’s next for the project? First of all she wants to go on with it in San Francisco – “People there react very differently”, Stark, who compares the town to Berlin’s Kreuzberg district, says. The other idea she has, is to maybe make book of some of the great stories. “People could send her their stories from all over the world.”

“It’s a different thing to have a book in your hands, as to just reading a weblog.” At the moment “A Compliment A Day” is an online-only project. With updates every day. With day 60 on the day of the interview, around one hundred compliments, people and their stories are upcoming.

Leaving the Goldmund Café to take some photos with the transatlantic diablog, a friendly man comes over to Rosa Stark. “I know you”, she says. “Didn’t you watch me play the violin the other day?” The man nods his head. He remembers Stark from one of her spontaneous sessions in Cologne. “I play the violin since I’m three years old”, 23-year-old Stark explains.

After showing the author a few exercises of Yoga on the streets of Cologne, Rosa Stark tries to remember one of the special moments of her project. One was when she was meeting a couple in Bonn – Germany’s former capital. “They have met at their both retirement home.” And both answered the same questions Rosa Stark asks everyone she makes a compliment. “Who, where, what and how did you react?”

Such as Käthe, the dancing queen of day 47. Or the Mofa-Man in Oberwinter. Or day 25’s fellow passenger. “Most people are very open. If they don’t want to be photographed then it’s okay.” And so the fellow passenger only appears as a drawing online.

The great thing about the project is that both, me and the complimented person, are happy afterwards.”

So if you are in Berlin, Cologne, San Francisco, Bonn or somewhere near those places just be yourself. Maybe Rosa Stark asks you her five questions.

More about that:
A Compliment A Day Blog
The project on Facebook

3 thoughts on “MEETING ROSA STARK: Yoga-teacher, student of philosophy and inventor of the “A Compliment A Day”-Project”

This site uses Akismet to reduce spam. Learn how your comment data is processed.

Munich, Germany. 1913. 76 years after writer and dramatist Georg Büchner had died, his stage-play and drama of jealousy “Woyzeck” had its premiere at Residenztheatre. And critics loved it. The audience not as much – at first.
From the #archive: A conversation with Aksel Ahmetoglu - Owner of Interior Aksel. A shop for vintage furniture.