A place to buy food on feast days – but not only on those days. A social gathering point. Or a piece of home as city guide Bruno Knopp calls it.

He must know it, since he’s presenting special tours focusing on Kiosks. And there are quite a few in Cologne. One of the places in Germany where the tradition of the Kiosk is still kept up.

Although the first Kiosks were installed in the Ruhr Area. As a place for labours where they could buy some water on their way to work, as Knopp explains. Today there’s even more. Newspapers, chocolate and even some tools for barbecue. 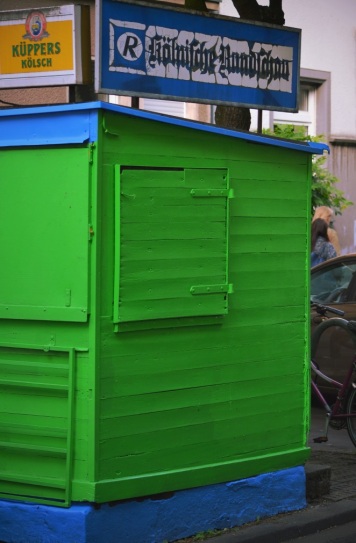 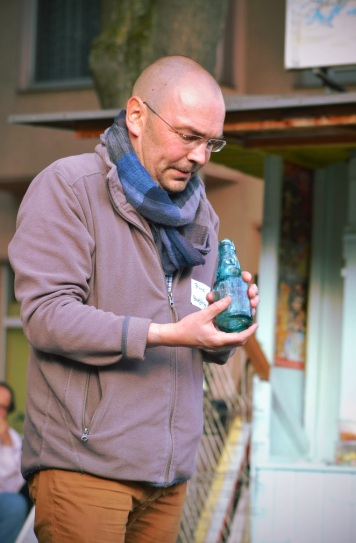 Presenting some of the old water bottles that were sold at traditional kiosks: City guide Bruno Knopp.

In Cologne more and more people from southern Europe own the small stand alone Kiosks. It’s hard work with opening times that are not very family-fiendly. And it’s a little tough to maintain a kiosk.

Traditionally, the ground is owned by the city government. The rest is up to the owner of the small building on top. So some of them struggle to keep their Kiosk in good nick.

According to a recent survey still 25,000 kiosks exist in Germany. 550 in Cologne. Such as the one by Spanish born Eudardo at Lotharstraße in Cologne. He tells the transatlantic diablog the story behind the choice of his exterior paint. Light green.

It was the color he used to paint his child’s room with, he says. The rest was used for his kiosk. Which is now quite special.

German photographer Stefan Matthiessen (website) is keeping what might disappear slowly. He’s taking photos of mostly stand alone kiosks in town. Documenting the stories behind it. Saying that most of them might disappear in the coming years, giving place to bicycle stand or something else. But there are still some…

On his two and a half hour tour in Cologne city guide Bruno Knopp presented at least seven kiosks to the group. Some of them located on main streets, some not. In both cases the tour made them more recognized, as people had a sharper focus on them.

One thought on ““Büdchen – A Piece of Home”: Sightseeing of stand alone kiosks in Cologne with Stefan Matthiessen, Bruno Knopp and ArtboxONE”

This site uses Akismet to reduce spam. Learn how your comment data is processed.